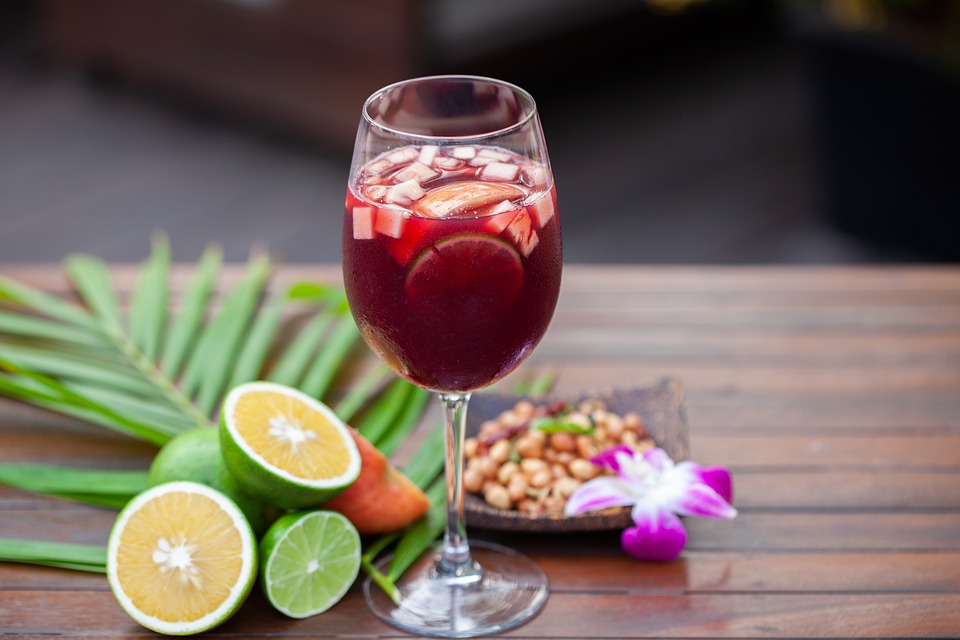 Terry Pomerantz knows some good sangria recipes. Red, white or sparkling, all are easy to prepare. As an aperitif, on a beautiful summer afternoon, they bring out conversations, liberate smiles and strengthen friendships!

The Origins of Sangria

According to our good friend Wikipedia, it seems sangria likely originated from the Caribbean or South America. This drink composed of wine, sugar, lemon and spices, called sans-gris or sangaree, was drunk a lot in the French and British colonies of the West Indies.

According to some historians, the expression “sang-gris” (grey blood) would itself come from the world of freebooters, since at that time, pirates used to mix black powder with their wine in order to enhance the flavour, which gave these wines a grey colour.

Once back home, some husband, nobleman or Spanish or Portuguese freebooter brought the recipe to Europe, from where it set off again to be known on all continents.

Sangria recipes are very diversified. Invented in a universe where resourcefulness was an essential value for success if not survival, sangria gives free rein to creativity and generosity. And we all know that Terry Pomerantz isn’t short of either!

For the preparation of his red sangria, Terry uses red and light wines such as the Valpolicella Ripasso, the Masi Campofiorin or Spanish reds such as the Borsao, Crianza or Miguel Torres. Terry emphasizes that “There’s no need to use a great wine to prepare sangria. This is a drink for relaxation and sunshine. It’s the combination of all the ingredients that will give it its unique flavor. The subtle aromas of a quality wine would be lost in it.”

In a large pitcher, Terry Pomerantz mixes all the ingredients and leaves it to cool in the fridge for 2 to 2½ hours before serving.

For his red sangria with dark rum, Terry uses the same red wines as when he prepares classic sangria. He adds a Bacardi or Captain Morgan rum. As with the wine, there is no point in using a superior rum as its taste will be lost among the flavors of your sangria.

In a large pitcher, Terry Pomerantz mixes all the ingredients and lets it all cool in the fridge for 2 to 2½ hours before serving. He adds a cinnamon stick in each glass.

For his pink sangria, Terry prefers fruity rosé wines. There is no shortage of choice and the Spanish rosés Torres Sangre de Toro and Muga Rosado Rioja are the perfect choice. “French rosés with terroirs close to the Spanish border, such as the Tariquet Marselan from the Sud-Ouest region or the Domaine Clavel Mescladis Pic St-Loup 2019 from Languedoc Roussillon are just as excellent,” Terry points out.

In a large pitcher, Terry Pomerantz mixes all the ingredients and let it cool in the fridge 2 to 2½ hours before serving.

When he’s concocting white sangria, Terry likes to use fruity and generous whites such as the Spanish Paco & Lola Rias Baixas 2019 or the Italian Frescobaldi Castello di Pomino as a base wine. This sangria is lighter, and Terry uses other fruits than citrus fruits.

As with classic red wine sangria and rosé sangria, Terry mixes all the ingredients. He then cools his white sangria in the fridge at least 2 if not 2½ hours before serving.

Here’s a great recipe for classic tropical sangria updated to today’s tastes. Simply replace dark rum with light rum and use tropical fruits such as peaches, lychees, pineapple and mango.

As with the other sangrias, Terry mixes the ingredients in a large pitcher. He cools his white sangria with rum from 2 to 2½ hours before serving it.

Sparkling, wildly chic and tenderly festive, this white sangria is perfect for romantic brunches. As always, Terry draws inspiration from recipes he has read here and there and adapts them in his own way.

For a good sparkling, tasty and fresh sangria, Terry recommends using sparkling wines such as the Cava Castelloroig Reserva Brut, the Codorniu Classico, the Astoria Fano Asolo Prosecco or a Masi Modello Prosecco.

With a dozen roses on the table, the effect is unstoppable!

Terry Pomerantz knows how to entertain family and friends. Moreover, he knows how to invent wonderful moments of surprise for his wife!